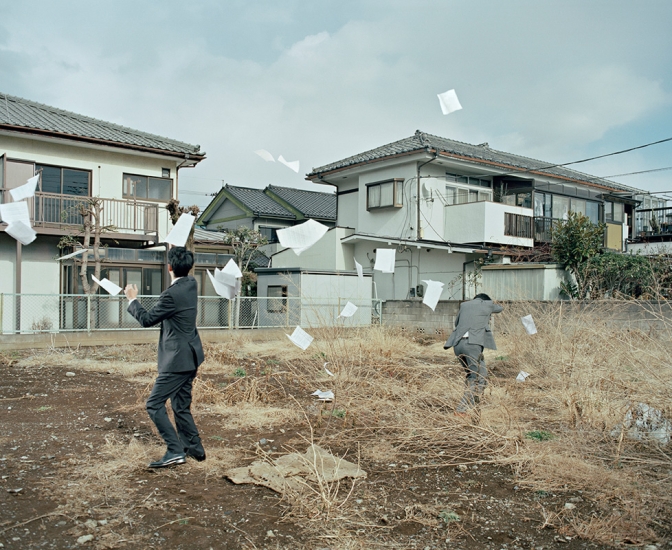 TWO KINDS OF MEMORY AND MEMORY ITSELF (2015)

Two Kinds of Memory and Memory Itself was created during a residency hosted by European Eyes on Japan with the EU-Fest Japan Committee and the European Capital of Culture, in which Pinckers was assigned the prefecture of Saitama. The agreement was to not photograph outside the prefecture. As part of a program of cultural diplomacy with Europe, Pinckers gave shape to a clichéd Western perception of Japan in order to remark on the constructed nature of such ‘Japaneseness’: bonsai, sumo, kimono, sushi, fugu fish, Yakuza, salarymen, video games and cosplay were no where to be found in the daily life of the commuter town just north of Tokyo that he was designated to work in. These defined cultural subjects all seemed part of Japan’s intentional cultural promotion towards a Western audience in the interests of nation-building and affirming political power in the region, along with maintaining the West’s exoticized desires of Japan that were developed with influential early post-war anthropological literature such as Ruth Benedict’s The Chrysanthemum and the Sword (1946).

In this series, photographs of Japanese stereotypes through Western eyes are staged and deliberately amplified, often referring directly to existing photographs made by Western artists, such as the woodcut by Hokusai, Travellers Caught in a Sudden breeze at Ejiri (c.1832) that became the inspiration for Jeff Wall’s A Sudden Gust of Wind (after Hokusai) from 1993, and in turn another version by Pinckers combining both.

The title of this series is a reference to a work by American postminimalist artist Richard Tuttle in which an arrangement of strings is placed on a rectangular floor based on Ryōan-ji, a Japanese garden containing fifteen stones placed so that it is impossible to see all of them at once from inside the garden.
Two Kinds of Memory and Memory Itself was produced in Saitama Prefecture for European Eyes on Japan / Japan Today vol. 17 with the EU-Fest Japan Committee and the European Capital of Culture 2015.
Research and Production by Victoria Gonzalez-Figueras
Reference texts & reviews:
Colin Pantall, Foto-Forum exhibition catalogue, Bozen/Bolzano, Italy, 2016
Cassidy Paul, TIME LightBox, online, 2016
Munemasa Takahashi, European Eyes on Japan vol.17, Japan, 2015