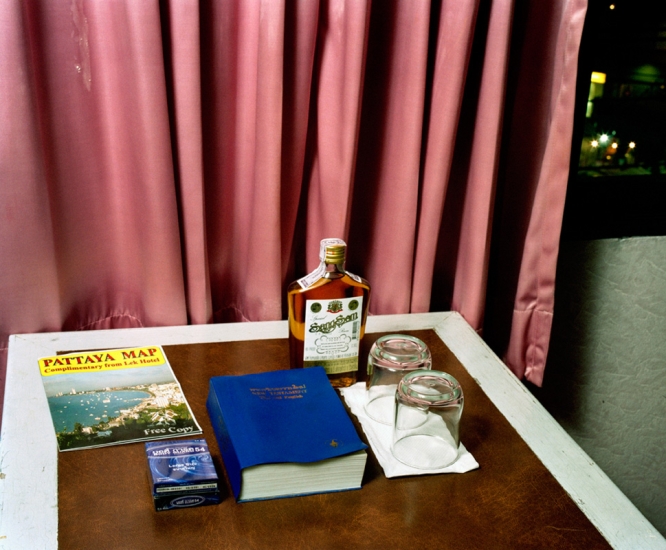 In the series Lotus, the gender crisis that kathoey face is transformed into a visual metaphor about the identity crisis that contemporary documentary photography encounters. Pinckers and De Bruyn believe that photojournalists and documentary photographers generally reproduce common aesthetic approaches that are not adapted to the subject matter and are often driven by tropes and clichés to produce the desired effect. In this series they have tried to comment on this approach by making explicitly manipulative, aesthetic images, but also by distributing disposable cameras to the people they have followed in order for them to contribute their own photographs to the series.
The photographs in Lotus feel staged yet appear too spontaneous to be directed. Pinckers and De Bruyn treat locations like a stage onto which potential situations unfold. A photographic environment is created by way of a decisive frame illuminated by intricate artificial lighting. Technical production elements explicitly reveal this theatrical construction by sometimes showing tripods or lighting equipment within the frame. Images often include the figure of the meta-spectator (someone that looks at the main characters within the same photograph) or the meta-photographer (a photographer within the image photographing the same scene), all within a visual space of spontaneous theatricality.
Reference texts & reviews:
Tom Seymour, British Journal of Photography, UK, July 2017
Olga Yatskevich, Collector Daily, online, 2016
Hans Theys, M HKAzine #11, Belgium, 2012
Hans Theys, FOMU .tiff magazine, Belgium, 2012
Hans Theys, Lotus, Belgium, 2011 (revised in 2016)
Mirjam van der Linden, (Re): TILT exhibition catalogue, The Netherlands, 2011
Book: Lotus, published by Lyre Press, 2016