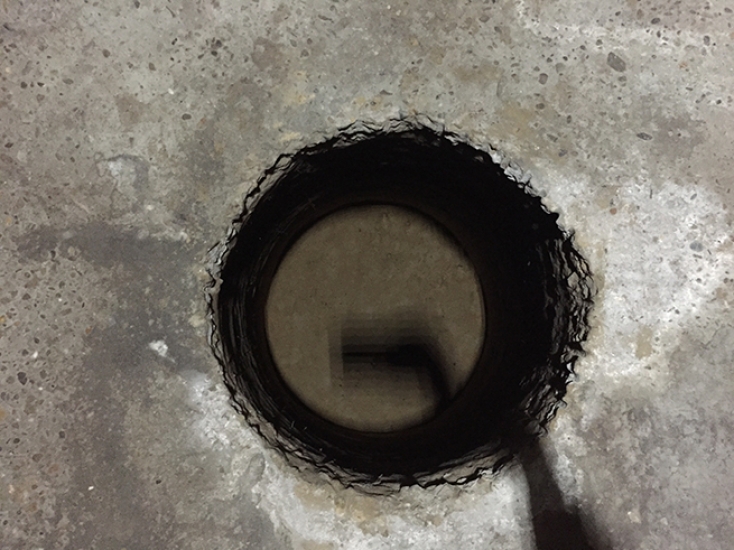 The photograph Tunnel, from the series The Fourth Wall (2012), was the starting point for the sculptural work Afgeknotte kegel (Truncated Cone). The image Tunnel is two-dimensional, but attempts to create an illusion of depth through the use of artificial light and perspective. This idea lead to a collaboration with sculptor Gauthier Oushoorn realised at the one day exhibition Land Van Garage. Contrary to the photograph, Afgeknotte kegel hides its depth by following the principals of an isometric drawing; a three dimensional object without a vanishing point.
Tuesday, 22 September 2015. Gauthier Oushoorn (1986) shows me a manhole he has dug with a friend, the artist Max Pinckers. We are standing in a garage which is part of an exhibition. The opening in the concrete floor is circular. The hole seems to have the shape of a cylinder, but actually has the shape of a truncated cone: the base is wider than the top. An optical illusion makes us believe that the bottom of the hole has the same diameter as the top, whereas its floor is 130 cm wide and its top 62 cm. The hole is 255 cm deep, which corresponds with the height of the ceiling of the garage. The opening at the top is as wide as a tire that was found in the garage. This means that the volume of the manhole is determined by measurements that were found on the spot and by the laws of perspective. The wall of the hole is smooth and carefully sculpted with a trowel. We meet an elegant momentary sculpture, for we feel time would make it implode.
– Edited excerpt from Taming the Waves by Hans Theys, 2015. First published in The Absence of a Permanent I, Lyre Press, Brussels, 2015.